This is an age, in America, when to see people teaming across an open space that is not a ball field, is to see protest — most likely on the news, in a far away place. New York, Oakland; Cairo, Tunis; Barcelona, Athens; Delhi. Or perhaps it is the bustling crowd under the sodium light of a parking lot, in the wee hours after Thanksgiving dinner has been packed into the refrigerator. Waiting for this year’s must-have bargain.

But this crowd, still gathering when the photo was taken this morning, is of a different sort. It is a group, primarily of students, who were brought together to celebrate, memorialize, and carry on the legacy of Martin Luther King, Jr. Gathered near the “liberty bell” at Grand Prairie’s town hall, some hundreds marched a few miles through the heart of this large, older suburb of Dallas. A blustery and cool morning, there were still a few hundred people at the curbside, smiling and taking pictures. 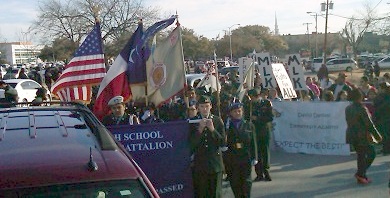 Truthfully, it was a small event. This is not a day and age filled with the public spirit, when parents from all over town bring their children to walk in or cheer on the parade. Yet perhaps it was a more special day because of that, if one takes the time to reflect. We walked together; we brought smiles to faces (particularly when tossing candy!); we interacted with friend and stranger alike in a spirit of joy, fellowship, and civic pride. No demands were made; these steps were not taken to eliminate poverty or insure equal opportunities in housing or education, though such steps are still needed. Instead, we simply, beautifully demonstrated unity in diversity.

In a lecture on the day after receiving the Nobel Prize for Peace, Dr. King said, “There is a sort of poverty of the spirit which stands in glaring contrast to our scientific and technological abundance. … We have learned to fly the air like birds and swim the sea like fish, but we have not learned the simple art of living together as brothers.” [1] 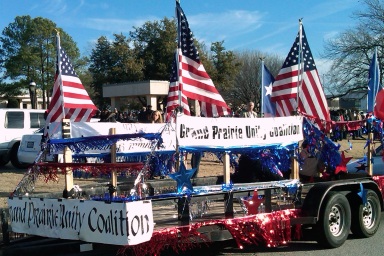 The Grand Prairie Unity Coalition supports the city’s annual parades — MLK, Cinco de Mayo, Juneteenth — every year. Last year, I merely helped to decorate the group’s “float”. Today I bestirred myself to attend, and it will not be the last time I do so, for it felt that our spirits where lifted above the material, and that we showed in some small way what it means to live together as brothers. 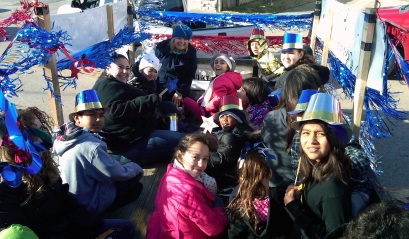 Posted with : Social Discourse, On the Subject of Religion, Inclusion and Anti-Racism