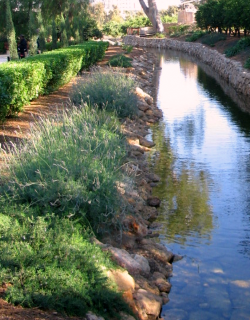 Stream at the restored
Ridván Garden
near Acre, Israel

“Fragmentation” often describes our personal lives. Through accident or design, we carve out separate spheres of being: family, work, school, sport, public policy, and so on. When we are healthy, we work toward unifying these through consistent expression of our values. The other extreme becomes hypocrisy.

The long-term tension between science and religion often reinforces that tendency toward fragmentation. Practicing and acting on a traditional Western mechanistic worldview while espousing divinely-grounded spiritual values is not intrinsically hypocritical. But, for me, it is a very limiting experience. In the integration of these two worldviews we find them strengthening each other. Spiritual principles can shape our research methods (viz animal experimentation), and scientific research can shape our application of justice and equality (seeking climate justice, for example).

In a prior blog post, I wrote about birdwatching helping me to overcome a sense of being cutoff from the natural world. That is a fragmentation. Prompted by an assignment in the GreenFaith Fellowship program, I have identified three passages from Bahá’u’lláh that have further united science and religion in my “eco-spiritual” awareness.

“My object is none other than the betterment of the world and the tranquillity of its peoples. The well-being of mankind, its peace and security, are unattainable unless and until its unity is firmly established. This unity can never be achieved so long as the counsels which the Pen of the Most High hath revealed are suffered to pass unheeded.”

Gleanings From the Writings of Bahá’u’lláh

What does it mean for unity to be a precursor to “peace and security”, and by implication to the “betterment of the world and tranquility of its peoples?” This I believe applies to all aspects of human endeavor and civilization - including our relationships with the natural world. No matter the technical or economic means at our disposal, we will not fully correct the inbalances in those relationships without recognizing and firmly establishing the real unity and equality of all peoples. Institutional changes are necessary for progress toward sustainable living, but insufficient without a widespread spiritual movement.

“Say: Nature in its essence is the embodiment of My Name, the Maker, the Creator. Its manifestations are diversified by varying causes, and in this diversity there are signs for men of discernment. Nature is God’s Will and is its expression in and through the contingent world. It is a dispensation of Providence ordained by the Ordainer, the All-Wise.”

Tablet of Wisdom, Tablets of Bahá’u’lláh Revealed After the Kitáb-i-Aqdas

As a scientist, this passage helps me bridge the gap between intellectual study and the mystic experience of nature. Moreover, it points me toward a word for that experience: revelation. In a faith where direct divine revelation is restricted to the Prophets, nature can be seen as the source for personal revelation. Further, humanity’s continual appreciation and study of nature should provide us with spiritual insights, going beyond the merely physical analysis of composition and mechanics.

“Whoso cleaveth to justice, can, under no circumstances, transgress the limits of moderation. He discerneth the truth in all things, through the guidance of Him Who is the All-Seeing. The civilization, so often vaunted by the learned exponents of arts and sciences, will, if allowed to overleap the bounds of moderation, bring great evil upon men. Thus warneth you He Who is the All-Knowing. If carried to excess, civilization will prove as prolific a source of evil as it had been of goodness when kept within the restraints of moderation. Meditate on this, O people, and be not of them that wander distraught in the wilderness of error. The day is approaching when its flame will devour the cities, when the Tongue of Grandeur will proclaim: ‘The Kingdom is God’s, the Almighty, the All-Praised!’”

Gleanings from the Writings of Bahá’u’lláh

This is no less than the Prophet’s own warning about the danger of materialism. While 20th century readers may have pondered nuclear disaster, the 21st century reader may just as well consider climate disaster caused by excessive consumption of fossil fuels and other resources. What stronger warning could have against scientific materialism and consumer culture?

Posted with : On the Subject of Religion, Social Discourse, Nature, Sustainability, Environment, Wildlife