Perhaps my most powerful emotion in direct reaction to the sites we visited during the pilgrimage was a feeling of peace and contentment. From 1853 to His death in 1892, Bahá‘u’lláh lived a life of exile and periodic imprisonmnet. The lowest point was His imprisonment in the citadel of ‘Akká in Syria — in the heart of a prison city built above the fetid ruins of the Cruisader capital of St. Jean de Acre. 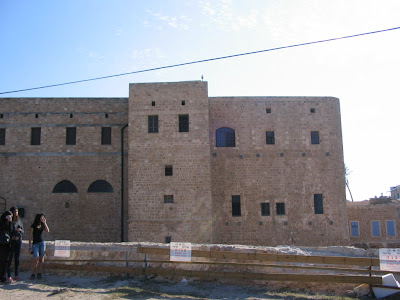 The Citadel of ‘Akká

After two years and two months in the citadel, the army needed to use it as a barracks and forced Bahá‘u’lláh, his family and followers (around 70 people), to vacate, providing a small pension for renting homes. The family (fourteen, I believe) found a small house, with three rooms as I recall. Extremely crowded and very poor conditions, but an improvement over the citadel. After a few years, the owner of the adjoining house made it available for rent, allowing the family (which had by that time grown due to ‘Abdu’l-Bahá’s marriage) to spread out into another four or five rooms, one of which has a magnificent balcony looking out over the Mediterranean. 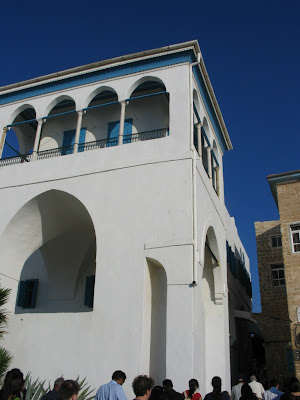 Balcony of the House of Abbud

{: .center-block} While He was never released by the Ottoman Sultan, sympathetic governors and muftis eventually convinced Him to move out of the city, to a small house in the village of Mazra’ih. This was about seven years after leaving the citadel. The house seen in the linked photo is larger than it was at the time. A British soldier and his wife (a Bahá‘í) had lived there for some years, closing in the courtyard and adding two large rooms to the front. In this house He lived for two years. 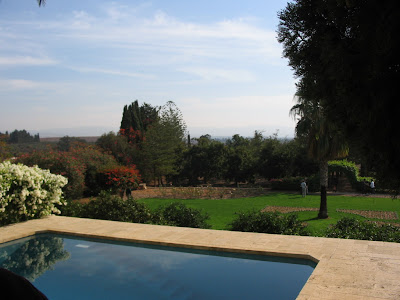 The back garden at Mazra’ih; the pool was fed by an aqueduct running through the grounds, from near modern Lebanon to the city of ‘Akká.

Finally, in 1879 a large house became available, again outside the city, because the inhabitants had fled due to some pestilence. The beautfiul mansion, and a series of smaller houses next to it, set amidst the garden retreat of a former provincial governor, finally gave the extended family room to breath. Though nominally a prisoner, and certainly unable to leave the region, Bahá‘u’lláh at last had some measure of freedom and beauty returned to His life. By this time his worldly ministry was longer over — turned over to His Son ‘Abdu’l-Bahá’ — but He continued revealing “the word of God” through tablets and epistles. Still beset by many enemies, each of these moves would have brought some comfort to His life. That is the sense of peace that I felt — the sense of a small measure of just deserts and karma in these successive abodes. 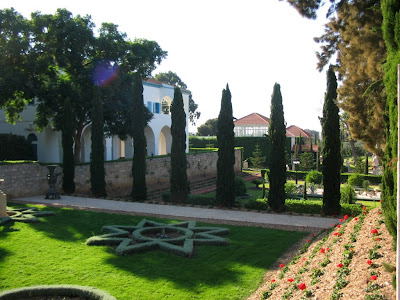 The Mansion of Bahjí (left) and the Shrine of Bahá‘u’lláh.