On July 13, a new statue was placed in the U.S. Capitol: Mary McLeod Bethune. Reading the news, I knew that I had heard this name - yet knew nothing about her. Who was this woman, the first African American to be so honored in the Hall of Statues?

Born into a large family on her parents’ farm in 1875 (she was the fifteenth child), she was taught early to look to the Bible for guidance and comfort, despite the family’s illiteracy. With help from a benefactress, she enrolled in school at the age of ten and eventually went on to collegiate study. Oft quoted as saying, “[t]he whole world opened up to me when I learned to read,” she went on to live an exceptional life of courage and action on behalf all people, most particularly her fellow African Americans and especially women of color. 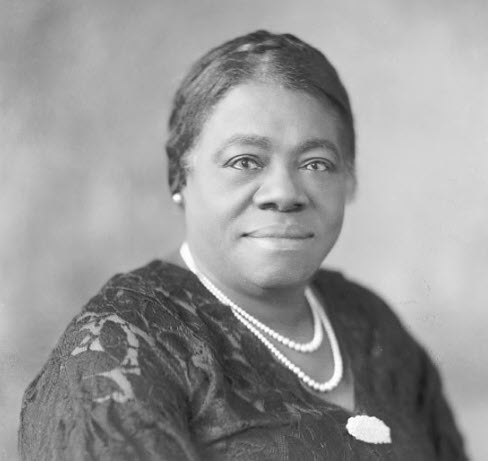 By 1904 she was in southern Florida, where she established a school and a hospital. That school eventually developed into today’s Bethune-Cookman University. Her mission reached beyond local concerns, as reflected in her voluminous writings published in papers and journals across the country, and in her civic engagement. She served in executive capacities with the National Urban League and the NAACP, and the National Council of Negro Women. An adviser to multiple U.S. Presidents, she was apparently the only woman of color present at the founding of the United Nations in 1945.

What drove this powerful woman? What gave her the strength to face down the Klan, to push for equality of rights and dignity within the Church halls and the halls of power, and to declare to her fellow Black people in the U.S. that “we, too, are Americans,” encouraging them to stand “shoulder to shoulder with all other groups of Americans, in defending the ideals of this country”? (1) In her own words:

“Love, not hate has been the fountain of my fullness. In the streams of love that spring up within me, I have built my relationships with all mankind. When hate has been projected toward me, I have known that the person who extended it lacked spiritual understanding. I have had great pity and compassion for them. Our Heavenly Father pitieth each one of us when we fail to understand. Jesus said of those who crucified Him,

‘Father, forgive them, For they know not what they do.’

Because I have not given hate in return for hate, and because of my fellow-feeling for those who do not understand, I have been able to overcome hatred and gain the confidence and affection of people. Faith and love have been the most glorious and victorious defense in this “warfare” of life, and it has been my privilege to use them, and make them substantial advocates of my cause, as I press toward my goals whether they be spiritual or material ones.” (2)

Faith and love refilled her as she continually emptied herself, just as Shoghi Effendi guided the Bahá‘ís to do when he wrote, “We must be like the fountain or spring that is continually emptying itself of all that it has and is continually being refilled from an invisible source. To be continually giving out for the good of our fellows undeterred by fear of poverty and reliant on the unfailing bounty of the Source of all wealth and all good—this is the secret of right living.” (3)

Her statue bears the epitaph, “Invest in the human soul, who knows, it may be a diamond in the rough.” So remarkably like Bahá‘u’lláh’s pronouncement, “Regard man as a mine rich in gems of inestimable value. Education can, alone cause it to reveal its treasures, and enable mankind to benefit therefrom.”(4) Her own drive to be educated revealed her gems, it is clear, and enabled humanity to benefit therefrom.

Bethune was a devout Christian, a seminarian whose words and deeds testified to a belief in the vitality and importance of a Christ-centered life. While I have no inkling of her feelings about the Bahá‘í Faith, she was certainly aware of it (see advertisement below). To my way of thinking, her life serves as a wonderful example of what it means to live a “true Bahá‘í life”: pairing worship and service, championing the cause of the oneness of humanity, contributing to the prevalent discourses of society and to the social and economic development of the community, raising up the voices of women. 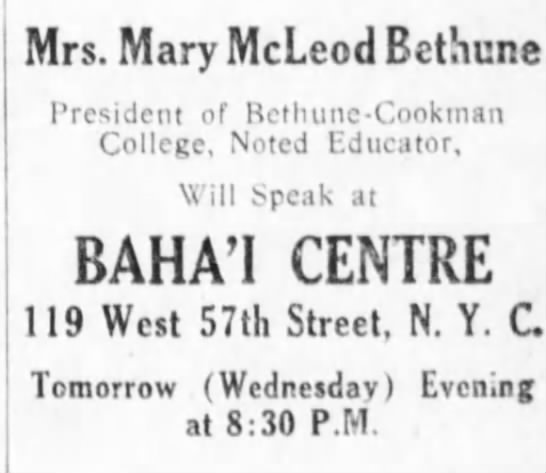 Posted with : Social Discourse, Inclusion and Anti-Racism, Justice, On the Subject of Religion