Prompted by a class I’m taking, I decided to try running Python from Windows Subsystem for Linux (WSL; actually, WSL2 to be specific). Installing Python in Ubuntu on Windows was relatively easy, though I did run into a couple of little problems with running poetry. Bigger challenge: running graphical user interfaces (GUIs) from WSL. Here are some quick notes from my experience. 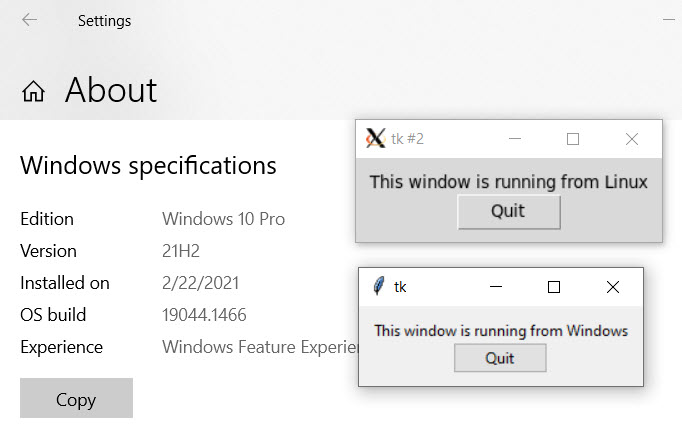 Screenshot shows that I’m running Windows 10, and shows a small GUI window opened from both Powershell and from Bash using the same Python script.

Assuming you are already running Ubuntu in WSL, then the following commands will help install Python (all run from your Ubuntu/bash prompt, of course):

This will make the python3 command available in your path. I’m a fan of using Poetry instead of Pip for dependency management. It can be installed in the normal Poetry way.

I have a thing about typing python instead of python3, so I created an alias in Bash: alias python=python3. However, Poetry does not execute commands through Bash, so the command failed with an interesting error message [Errno 2] No such file or directory: b'/usr/share/PowerShell/python'. Wonder why it looked in a PowerShell directory?

Not surprisingly, there are others who like to type one character less:

Now the python command works as desired, from Bash and from Poetry.

Executing a Python-based GUI app from WSL seems… a bit odd… but let’s run with it, shall we? Because it is a requirement. We will need to use the tk toolkit for this class. If I understand correctly, it is included in Python 3.9+. But I have 3.8. Most likely I could find a way to upgrade to 3.9, but I don’t have a compelling reason yet, and the following command will install the tk support.

Next: how does WSL open a GUI window in Windows 10? You need an X-Windows compatible server for that. There are several proprietary and open source options available. I chose to go with the open source VcXsrv, which I installed in Windows (not WSL) via Chocolatey: choco install vcxsrv.

Once installed, you need to run it via the XLaunch command, which will be available in the Windows start menu. This Stack Overflow post has good suggestions for launching it correctly. I had to read through the first few posts to get the steps right. The application prompts you for configuration. Key values to use:

The answers mention opening the Windows Defender firewall to VcXSrv. The way they do this in the Stack Overflow post might be dangerous, especially in combination with disabling access control. A potentially safer* way is to simply allows WSL2’s network interface to access your local server. That means you are not opening your firewall to the Internet. This can be done with the following command, run from PowerShell in administrative mode:

* I have not been in the business of writing firewall rules since the early 2000’s, so while I think this is correct, I might be mistaken. Please think through your security posture carefully before following this path.

Finally, back at the Bash prompt, you need to set the DISPLAY environment variable so that the X-Windows commands will be redirected to Windows. This variable will need to access Windows through the network, addressing the Windows computer by server name or IP address. Typically one might think of using “localhost”. However, WSL2 runs in an isolated network inside of Windows and it does not recognize your Windows as “localhost”. So for this command you must use the WSL2 instance’s current IP address. Here is a convenient command that will read your IP address into the DISPLAY environment variable. The zero at the end assumes that VcXSrv was configured to run on display 0:

And for a more interesting demonstration, generating the windows shown in the image above:

Two environment variables were created in this process. It would be tedious to come back to this post and recopy them every time a new Ubuntu/Bash shell is opened. Linux has a simple way of dealing with this: the .profile file contains instructions that run every time you open a command prompt. There is also a .bashrc file that runs next, whenever you run Bash (there are other shells that you could switch to, though Bash is the most popular). Edit either one.

You will need to use a text editor such as nano, vim, or code (if you don’t have it, typing code will automatically start the install of Visual Studio Code). All are excellent editors. Those who are new to Linux will probably feel more comfortable starting up Visual Studio Code. I use it all the time. But I also use the command line frequently when I only need to edit one file. Knowing how to use nano or vim is a wonderful skill to develop. Of the two, nano is easier to learn, and vim is more powerful. Whichever editor you choose, open the file like so: code ~/.profile. The ~ instructs the operating system to look for the file in your home directory.

Once you figure out which editor to use, just add the following two lines at the bottom of the .profile file:

Save that. Once saved, you can immediately invoke it, without starting a new window, with this command: source ~/.profile.