In the east, you have the Ruby-Throated Hummingbird. In the west, there’s the Black-Chinned Hummingbird. As with many other east/west divisions in both the animal and plant kingdoms, the two hummers sometimes overlap right here in Dallas county — for example, you can find both of them at Dogwood Canyon Audubon Center at Cedar Hill. Living in northwestern Dallas County, we did not know which to expect when we set out our feeder a few weeks ago. Thus far, it is has been entirely Black-Chinned. 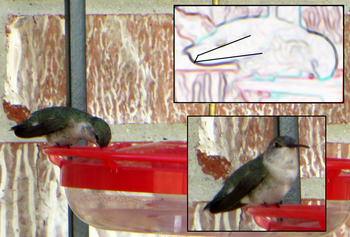 It started with a lone male. We saw his purple/black gorget in the sun, and that was all we needed to identify him. There have been at least 2 adult males zipping around. Yesterday, the females showed up. Two of them. Our first sight of a female was followed by witness of an over-excited male, who went into his wide J-shaped display dive. She wasn’t interested. But the fact that he was showing off for her was our first clue that we were still seeing Black-Chinned.

Next we got the binoculars and looked at a few signs. My other half managed to get a couple of decent photographs through the patio window. The montage above helps illustrate some of the field marks for distinguishing the two:

Ruby-Throated Hummingbirds also have longer tails, relative to the wings. The photos do not show this because of the perspective, but I tried to give that sense with the crude drawing. Another sign, not illustrated here (and not strongly seen in today’s birds) is that Black-Chinned tend to pump their tails significantly more frequently.