The Yard and the Ditch

My earliest experiences of nature were of playing in the yard — and out back — as a child in a Houston suburb. As I recall it, our backyard had a pecan and some young oaks, along with multiple gardens. There was a red oak — or perhaps a maple? — planted out front, and a sweet gum tree whose seed casings would bring forth caution in even the most carefree of barefoot children. And of course there was the St. Augustine grass. This was all conducive to much play outside. But the best part was behind the fence: The Ditch. 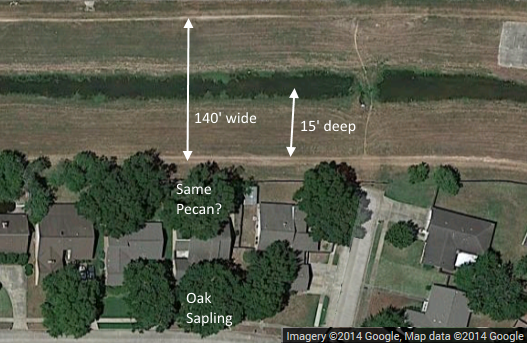 The Ditch might have been a bayou once upon a time, emptying as it does into the famed Buffalo Bayou of Houston. Or it may have simply been a canal for the rice farms that covered this stretch of former prairie through much of the 20th century. A six-year-old does not distinguish these things, or realize that a natural channel would have more than weeds about it.

Amazingly, my impression of it is just good enough that I was not far off in my estimation of its size: Google Earth shows it as approximately 140 feet from trail to trail on either side, and about 15 feet deep. No doubt this was artificially deepened, widened, and straightened to help move water swiftly away from the former rice paddies.

Depauperate though the area was, still there were invertebrates in plenty, as well as a few creatures with spines. At that age I had not learned to look up — birds were not part of my awareness whatsoever. Like so many generations before me, I recall the delight of bottling up a firefly for a short time. Doodle bugs went into butter tubs with a bit of water and grass. I learned the hard way that they didn’t really need that standing water. Incidentally, “doodle bug” in this case is a Texanism for what others call rolly pollies or pill bugs. The early-80’s game of Frogger was quite visceral for me: the street out front was home to many smushed carcasses. And with the frequent showers, followed by sunshine, one had to dodge fried worms while running down the sidewalk.

The ditch itself always had water, with small fish, snakes, and the occasional turtle. There were grasses and flowers, but as you can see there were no trees. There was a small “fort” area at one time, in the north bank (top of the photo). As a I child I thought it was carved out of the compacted soil by other, older kids. Now I recognize it as an erosion pattern with a bit of help from small hands and shovels. But truthfully there was not much to do in the ditch, as an unaccompanied child, but it was a magical place nevertheless.

Shortly after journaling about the ditch several weeks ago, I found that I was not alone. In Last Child in the Woods (p173), Richard Louv talks about a ditch as one of the “small galaxies we adopted as children,” going on to say that, “to a four-year-old, such a ravine is as deep and wide and peculiar as the Grand Canyon will be to that same boy decades later.” Referring to this “unofficial countryside,” he comments that “[s]uch habitats are often rich with life and opportunities to learn.” And so it was for me.

Although I do not recall learning anything specific in my wandering in that ditch, I have no doubt that it was the inspiration for a life-long attraction to creeks and streams — a connection I am only thirty years later fully realizing.