Nature-lovers often speak about transcendent moments, occasions where some experience moved them to a profound awareness of life, the universe, and everything in it. For some, these are timeless minutes, forever memorable, forever inspiring. All of the senses align in memory, and perhaps a bit of wisdom descends in epiphany.

My transcendent moments are not so strong; perhaps that is from a weak sense of smell. Or perhaps because I seek out a low level extraordinary at every turn: the senses are not so overwhelmed in these daily moments, as the ordinary passes beyond rationality. These peek experiences do exist however, and as I sift through the shoebox of memory, two stand out at very different scales. 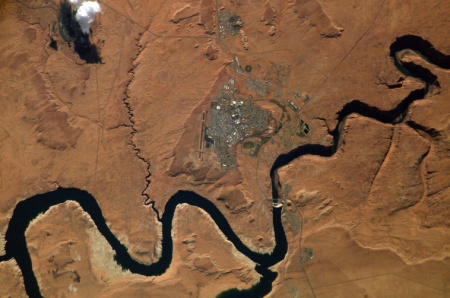 Page, Arizona, along the Colorado River. Courtesy of Nasa.

In 1998, I flew from Austin, Texas to San Francisco, California, to attend the third global summit for the creation of a United Religions. Although I had flown out west before, this time there was something different and unutterably magical as I gazed out that small, pressurized portal at 30,000 feet.

Somewhere beyond the pines and mountains of New Mexico, the ancient-yet-still-developing landscape unfolds in a spectrum of subtle variations between brown, orange, and red. Punctuated by green places. And the Colorado River. Textures undreamt lay far below and shifted with the slightest movement.

And then came the mountains, the still snow-capped Sierra Nevadas. These were the impossibly tall palisades of story and legend: the very reflection of Tolkien’s Ered Nimrais, as I imagined them. These were the peaks and shadowy passes of the Donner Party.

We flew over this all, yet behind us this landscape remained unconquered. Yes, a mighty dam. Yes, inappropriate fairways enabled by that dam. They were blips, minor marks barely worth noticing on our vast Earth Mother. 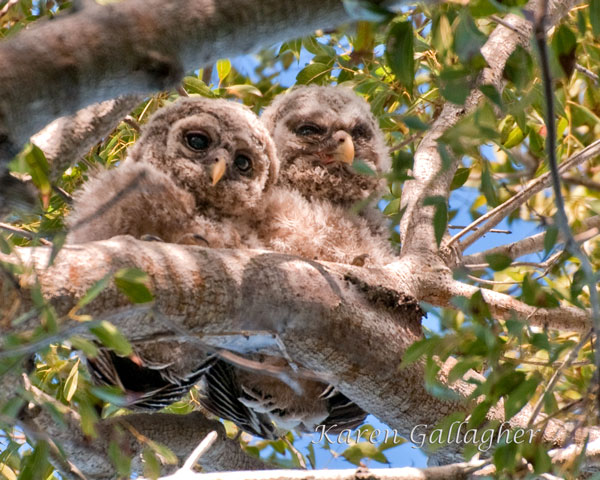 The second scene occurred in 2010 in a well-wooded park above the Mississippi River in St. Paul, Minnesota. We were out performing points counts of the land-bird population for a certain someone’s PhD work. Once or twice before we had glimpses or heard a Barred Owl. On this occasion, we had something truly wonderful - one of us managed to spot two baby Barred Owls, barely fledged, with those giant owl feet. Much like the two above, except on a bare pine bough.

Time could not hold us in the usual way, as we stood there enraptured by these wide-eyed balls of fluff and feather. Rather than the transcendence of the vast reaches, this was quite the opposite. It was a moment of fuller awareness of Being. Of Life. While the canyons and mountains presented ancient, slow, beauty, these owls were the here and now. The fast, young, fresh. Vital, worldly, and visceral.

Here, before me, was life renewed — in a form that stirred that mysterious animal response of nurture, that human non-rational-yet-deeply-intrinsic feeling of unbearable cuteness, for lack of a better or manly term. The Unbearable Cuteness of Being.

Although so vastly different in scale, these were two moments that turned the everyday into the divine cathedral. Each created a sacred space in uniting time and place in four dimensions, so briefly, so sharply, yet so impossible to remember perfectly. These are the moments to seek out again and again - but no, not to seek out, for neither were sought, as such. These are the moments of humble wakefulness that must simply be recognized as they occur.