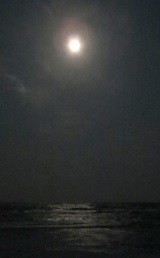 Last night we turned off the lights early for Earth Hour, and went outside for a good long walk through the neighborhood and on the nearby CampiÃ³n Trail.

The photo at right is nearly three years old, and represents one of the last good long night walks I had taken - that time at the beach in Port Aransas. While walking in Irving, TX is nowhere near as nice as walking the beach, it was still delightful. We saw no fireflies - too early, if they’re out there. We saw and heard no owls, as I had hoped. But the tree shadows from a bright half-moon, overcoming the city glow, was magical in itself. This suburban dweller, overcome by too many street lights, had forgotten about the beauty of moon shadows.

Oddly enough, the highway noise seemed louder at night than daytime, and the spell of the evening wore thin when reached the end of the trail: for there we were confronted with the incredibly bright lights of a soccer complex several miles north. What a waste! Lights several miles away should not be glaring into my eyes. What a tragedy.

The next tragedy were the bright, every-direction-but-down, lights on top of a bridge over a canal. These same lights are provide a sense of safety along the canal, but could be much smarter. And then there was the library we walked past, with bright lights illuminating the glass walls, generally pointing up, and soft lights glowing from the top of the inside walls. Nearly all of that light was simply wasting electricity and - at least theoretically - messing with the circadian rhythms of any wildlife living nearby. Such lights can even be a distraction to birds migrating through, who might be navigating along the nearby Elm Fork of the Trinity River.

Still, it was a delight to be out on a warm spring evening, enjoying a light breeze and the moonlight. Even the tragedy of human folly could not take that away. If only I had time to advocate for a dark skies program in Irving…