The .NET projects for FlightNode were created in several different Git repositories, thus giving us several small, well-contained, and re-usable projects. These small projects would be installed into the Service project as NuGet packages, which also makes for a faster compile in each discrete solution:

But… this has approach has caused problems.

After trying to solve the third problem several times, it is finally time to move on by fixing the problem. 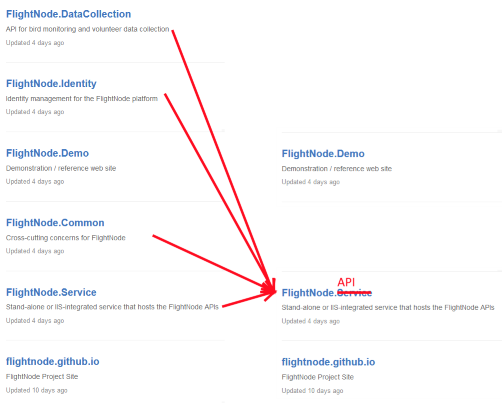 There are many ways to structure the combined files. In order to help preserve the possibility of re-splitting in the future, I will organize in this way:

I will repurpose the existing FlightNode.Service repository as FlightNode.Api, and thus need to restructure it first. But before doing anything, I will create a branch in Git, making it simple to get back to the original code if I find I have a problem. From a Git-Bash prompt:

And I’m leaving the LICENSE file in place. Let’s go ahead and commit those changes locally, without pushing to the server:

The simplest thing to do would be to cut and paste the files in Windows, from one directory to another. But, we would lose our Git history. So let’s use Git to do this for us. Helpful article: Moving Files from ON Git Repository to Another, Preserving History. In this case, I’m not interesting in keeping the original repository, so the commands can be a bit simpler than in that article.

The Common repository currently has two projects, and they are already separated into src and test folders. Staying in that repository, let’s move the files into a Common folder and then commit the changes. The license file is identical to the one already in Service; therefore, we can ignore it. Best to delete it. I will stay in the develop branch here.

Now it is time to pull this code into the Service repository:

Hey, there’s a merge conflict. Didn’t expect that: forgot about the hidden .gitignore file. Of course it is a rather easy merge to handle.

Oh, that solution file should have stayed in the root. I’ll go ahead and rename it in anticipation of the repository rename. 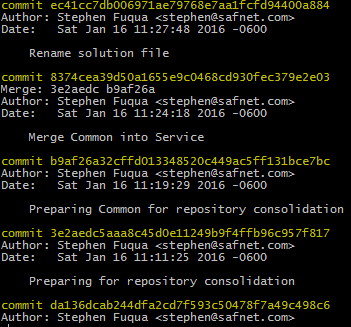 Repeat the steps above. Not worth showing in detail.

Fixing Up the Solution

Open the renamed FlightNode.Api.sln file in VS2015. The solution already had references to all of the existing projects, since I hadn’t yet turned them into distinct NuGet packages. These references are now broken and must be fixed manually. Simplest thing to do: remove and re-add them, keeping the helpful breakdown into solution folders.

Of course all of those red lines indicate build errors, all of which are dependency problems. Since NuGet packages have been very problematic, I’m going to do radical surgery:

Initially the packages restored into c:\workspaces\FlightNode\Packages, which is not what I wanted - Packages should have been placed under FlightNode.Service. To remedy that, I’ll add a nuget.config at the root of the Service folder.

As a final test to make sure all the dependencies are wired up correctly, I’ll remove the Packages directory again, and move the FlightNode.Service folder (temporarily) to a path outside of Workspaces.