“Infrastructure as Code”, or IaC if you prefer TLAs, is the practice of configuring infrastructure components in text files instead of clicking around in a user interface. Last year I wrote a few detailed articles on IaC with TeamCity (1, 2, 3). Today I want take a step back and briefly address the topic more broadly, particularly with respect to continuous integration (CI) and delivery (CD): the process of automating software compilation, testing, quality checks, packaging, deployment, and more.

To level set, this article is about improving the overall developer and organizational experience of building (integration) and deploying (delivery) software on platforms such as:

Personally, I have some experience with perhaps half of these. While I believe the techniques discussed are widely applicable, I do not know the details in all cases. Please look carefully at your toolkit to understand its advantages and limitations.

Many tools provide useful GUIs that allow you to, more-or-less quickly, setup a CI/CD process through point, click, and typing in some small attributes like project name. Until you get used to it, writing code instead of clicking might actually take longer. So why do it?

The code in an IaC might project might not be executable (imperative); it may instead be declarative configuration that that describes the desired state and lets the tool figure out how to achieve it. Examples of each:

Which style, and which type of file (bash vs. powershell, json vs xml) will largely depend on the application you are interacting with and your general objectives. Often times you won’t get to choose between them. Many tasks can rely on declarative configuration, especially using YAML. But that is not well suited for tasks like setting up a remote service through API calls, which might require scripting in an imperative language.

Every platform has its own approach. Following the simplest path, you can often get up-and-running with a build configuration in the tool very quickly — but that effort will not help you if you need to change tools or if you want to run the same commands on your development workstation.

How do you avoid vendor lock-in? “Universalize” — create a process that can be transported to any tool with ease. This likely means writing imperative scripts. 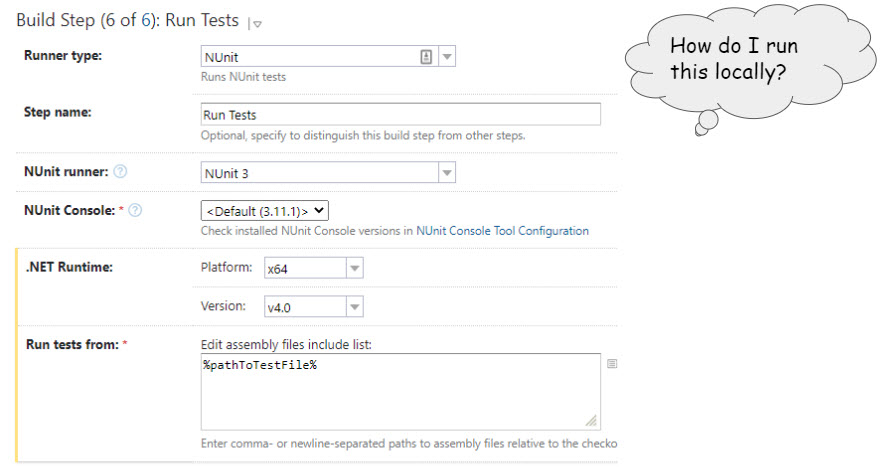 The screenshot above is from TeamCity, showing a build runner step for running NUnit on a project. A developer who does not know how to run NUnit at the command line will not be able to learn from this example. Furthermore, the configuration process in another tool may look completely different. Instead of using hte “NUnit runner” in TeamCity, we can write a script and put it in the source code repository. Since NUnit is a .NET unit testing tool, and most .NET development is done on Windows systems, PowerShell is often a good choice for this sort of script. Configuring TeamCity (or Jenkins, etc) to run that script should be trivial and easy to maintain.

Examples of IaC Tools and Processes

While this article is about continuous integration and delivery, it is worth noting the many different types of tools that support an IaC mindset. Here is a partial list of tools, with the configuration language in parenthesis.

Generally, these tools use declarative configuration scripts that are composed by hand rather than through a user interface, although there are notable exceptions (such as IIS’s inetmgr GUI).

At some point, vendor lock-in does happen: there are no tools (that I know of) for defining a job with a universal language that applies to all of the relevant platforms. TerraForm might come the closest. There are also some tools that can define continuous integration processes generically and output scripts for configuring several different platforms. For better or worse, I tend to be leary of getting too far away from the application’s native configuration code, for fear that I’ll miss out on important nuances.

Any of those commands can easily be run in any build automation tool. What are these commands doing? The first command is for the build operation, and it calls function Invoke-Build:

Side-note: Invoke-Step seen here, and Invoke-Execute seen below, are custom functions that (a) create a domain-specific language for writing a build script, and (b) setup command timing and logging to the console for each operation.

This function in turn is calling a series of other functions. If you are a .NET developer, you’ll probably recognize these steps quite readily. Let’s peak into the last function call:

Now we see the key operations for compilation. In this is specific case, the development team actually wanted to run two commands, and even before running them they wanted to capture log output showing the version of dotnet in use. Any developer can easily run the build script to execute the same sequence of actions, without having to remember the detailed command options. And any tool should be able to run a PowerShell script with ease.

As the project in question (LMS Toolkit) is a set of Python scripts, and because we wanted to use a scripting language that is well supported in both Windows and Linux, we decided to use Python instead of a shell script.

There is a helper function for instructing the Python interpreter to run a shell command:

And then we have the individual build operations, such as running unit tests with a code coverage report:

Reading this is a little strange at first, because the Python subprocess.run function is expecting an array of commands rather than a single string. Hence the command poetry run coverage report becomes the array ["poetry", "run", "coverage", "report"]. But here’s the thing: once you write the script, anyone can run it repeatedly, on any system that has the necessary tools installed, without having to learn and remember the detailed syntax of the commands that are being executed under the hood.

The JavaScript / TypeScript world provides npm, which is a great facility for running build operations.

Using Ed-Fi Project Buzz, you can run commands like the following:

The npm run XYZ commands are invoking scripts defined in the package.json file:

Look at that debug command! Imagine having to type that in manually instead of just running npm run test:debug. Yuck!

That is, examples of scripts for automating the software that will run the integration and/or delivery process.

I can distinctly recall seeing advertisements for Octopus Deploy that castigated the use of YAML. While they have long supported JSON import and export of configurations, those JSON files were not very portable: they could only interoperate with the same Octopus version that created them.

Octopus has been coming around to deployment process as code. It appears that they’re embracing the philosophy extolled in this article. The referenced article doesn’t give examples of how to work with Octopus itself; instead it just tells you to use the .NET SDK. Which is what we’ve done in the example below. Also of note: as of May 2021, the roadmap shows that Git-integration is under development. This feature would, if I understand correctly, enable changes in the Octopus Deploy UI to be saved directly into Git source control. That’s a great step! I do not see any indication of what language will be used or whether changes can be scripted and then picked up by Octopus Deploy instead of vice versa.

In the Ed-Fi ODS/API application there’s a PowerShell script that imperatively creates channels and releases, and deploys releases, on Octopus Deploy — all without having to click around in the user interface. The following example imports the module; runs a command to install the Octopus command line client (typically a one-time operation), and then it creates a new deployment channel:

And here’s the body of the Invoke-OctoCreateChannel function, which is running the .NET SDK command line tool:

TeamCity build configurations can be automated with either XML or Kotlin. The latter is my preferred approach, and I’ve talked about it in three prior blog posts:

Intrinsically YAML-driven, the following example from the Ed-Fi LMS Toolkit demonstrates the use of the Python script that is described above. For brevity’s sake I’ve removed steps that prepare the container by setting up the right version of Python and performing some other optimization activities.

Taking the approach of Infrastructure-as-Code is all about shifting from a point-and-click mindset to a programming mindset, with benefits such as source control, peer review, and repeatability. Most continuous integration and delivery tools will support this paradigm. Many tools offer specialized commands that hide some of the complexity of running a process. While these can get you up-and-running quickly, over-utilization of such commands can lead to a tightly-coupled system, making it painful to move to another system. Scripted execution of integration and delivery steps (“universalizing”) can lead to more loosely-coupled systems while also enabling developers to run the same commands locally as would run on the CI/CD server.

More generally, the use of IaC represents a “DevOps mindset”: developers thinking more about operations, and operations acting more like developers. To the benefit of both. Good DevOps references include:

All code samples shown here are from projects manged by the Ed-Fi Alliance, and are used under the terms of the Apache License, version 2.0.