Raising Our Expectations for Climate Leadership, Institutionally and Individually 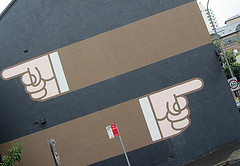 Some rights reserved
by Newtown grafitti

In an editorial published last weekend, Power, Privilege, and Climate Change: A Tale of Two Presidents, Vassar College professor Joseph Nevins contrasts the lifestyles of the richest and “poorest” presidents in the world, in the context of global climate change: those of the United States and Uruguay. It is a powerful reminder that we in the U.S. can’t look at climate change, point the finger elsewhere, and keep going about our lives.

As President, Mr. Obama has made some strides with respect to climate change (e.g. higher mileage standards). Yet this article reminds us of the tyranny of lowered expectations. Justice and equity demand that we each sacrifice some of our “easy living” for the global good. We must “be the change we wish to see” to paraphrase Gandhi. That change must come at the grassroots - but it also must bubble up to the top of the power structure. How can we connect the two ends?

They say that all politics is local. As we work to reduce our own energy footprints, perhaps concerned individuals should redouble their efforts to “green up” their local governments; for instance, we can ask our city leaders to join the sustainable cities movement. City council and school board members become state leaders, who in turn become national legislative and executive leaders, carrying local lessons with them. While on the topic of institutional change, let us not forget our religious bodies: clergy and lay leadership can and will influence their membership, through their personal and institutional examples. This is precisely what Interfaith Power & Light is trying to accomplish.

Let’s go back to the grassroots now. Nevins tells us that Uruguay’s President Mujica, in a speech at the UN Earth Summit last year,

“… insisted that “the challenge ahead of us . . . is not an ecological crisis, but rather a political one.” Pointing to a “model of development and consumption, which is shaped after that of affluent societies,” societies ruled by the dictates of the capitalist market, Mujica said it was “time to start fighting for a different culture.” Arguing that the assault on the environment was a symptom of a larger disease, he asserted that “the cause is the model of civilization that we have created. And the thing we have to re-examine is our way of life.”

Here in the United States, how do we do that? Collectively, we have managed to construct a “comfortable” way of life that is very challenging to escape — and frankly, is really not all that good for us. Heart disease, diabetes, cancer; mental illness, social isolation, rancorous public discourse; these are but some of the physical and spiritual symptoms of a diseased social structure. We need to construct new models, at the micro level, in order to arrive at a new mode of life at the civilizational level. In the struggle to avoid the worst threats of climate change, we need, as ‘Abdu’l-Bahá says, “justice and impartiality”, which

“… means to have no regard for one’s own personal benefits and selfish advantages, and to carry out the laws of God without the slightest concern for anything else. It means to see one’s self as only one of the servants of God, the All-Possessing, and except for aspiring to spiritual distinction, never attempting to be singled out from the others. It means to consider the welfare of the community as one’s own. It means, in brief, to regard humanity as a single individual, and one’s own self as a member of that corporeal form, and to know of a certainty that if pain or injury afflicts any member of that body, it must inevitably result in suffering for all the rest. “