Can We Talk About Climate Change? Pt 1

Last weekend, faith communities across the U.S. hosted more than two-hundred events aimed at expanding awareness of the reality of climate change. This was the National Preach-In on Climate Change, sponsored by Interfaith Power & Light. As Co-Chair of Dallas Interfaith Power & Light, I was excited and honored to be able to give a presentation to my own community (Bahá‘ís of Irving) and to attend the innovative Preach-Off on Climate Change in Austin. The Bahá‘í s of Austin also afforded me an opportunity to give my presentation on Moral Imperatives for Climate Action, from a Bahá‘í Perspective, at their Sunday morning devotional program. Hopefully I was able to provide something useful to a few people; I certainly received much from my conversation and participation with people from many faith backgrounds. This will, God-willing, be the first of two blog posts reflecting on the conversations. 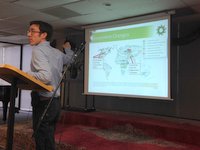 Climate change is occurring; its impacts are and will be diverse and disastrous.

My own presentation was nothing ground-breaking. Nevertheless it felt incredibly meaningful to hone my own ability to express the importance of acting on climate change before it acts on us. I would encourage as many people as possible to do their own research and find their own voice on this critical topic. You can download a PDF version of the slide deck at greenbahai.com, beneath the “resources” tab (quick summary in the sidebar here).

Although the presentation ran longer than I hoped (about 40 minutes), I think the mixture of science and religion helped keep the audience attentive. The presentation tried to make clear that real harms face people and ecosystems around the world, it needed at least one more slide: one that presents climate change as a clear and present danger, a danger that requires action NOW. We cannot wait for today’s children to solve the problem. Some say we have but 16 years to radically change our ways. Maybe that is a doomsday prediction, but we must take it seriously.

The presentation was followed by conversation around an ecological footprint calculator, which proved to be an incredibly useful tool for getting people into dialog with each other. It was suggested that participants pair off and identify a target for action to change their footprint. They would then touch base from time-to-time to see how they were doing. It would have been interesting to ask people to share their commitments, even if anonymously (i.e. write it down on a collective action sheet).

One of the questions raised was how to talk with people who do not believe that climate change is being driven by human activities (“anthropogenic climate change”). My response was that I just don’t bother having that conversation. Response from the questioner: “I’m tired of preaching to the choir.” Good point, and that question really stuck in my craw. There were some good responses, but egoistically I was wrapped up in my own thinking and didn’t pay close enough attention. The answer I came up with the next day was probably subconsciously influenced by the responses from others. Hypothetical conversation:

Maryam: … we must act on climate change now…

Thomas: But what can we do? It is caused by solar activity and other natural factors - not human activity. It is just a ridiculous ploy. Look at the good that natural gas has brought to the U.S. economy in the last five years! Just look at the boom from oil in North Dakota! They have the lowest unemployment in the nation. Disrupting that economic activity will hurt real people.

Maryam: On the contrary, most of the world’s climate scientists agree that human activity is actually the main force. But I suspect we’re not going to agree on that right now. Let’s look a different perspective: pollution.

Thomas: Ok, pollution, what about it? Climate change is supposedly about carbon dioxide, which occurs naturally.

Maryam: Can we agree on the basic fact that burning fossil fuels causes smog and pollution?

Thomas: Well, there are other sources too, but yeah I guess it is no coincidence that Houston and LA have horrible traffic and horrible smog.

Maryam: And can we agree that smog is bad for our health?

Thomas: Um, sure. I think I’ve heard that there are more heart attacks and asthma.

Maryam: Then maybe we can agree that we should shift away from burning fossil fuels, which cause most of that air pollution?

Maryam: I’m not going to lie — that is the primary answer to climate change. But it is also the answer to air pollution. Can we agree on doing something about that?

Thomas: let me think about it. It is a different perspective. I might be able to agree that we should act on air pollution in its own right, without thinking about the supposed link to climate change.

Posted with : Social Discourse, On the Subject of Religion, Climate Change