Configuring a WCF service across security boundaries can be a tricky business, or so I learned recently. Testing went well, but the move to production failed for a WCF client/server scenario, with the client application encountering an error: SOAP security negotiation with '<myEndpointAddress>' for target '<myEndpointAddress>' failed. See inner exception for more details. Inner exception: The Security Support Provider Interface (SSPI) negotiation failed.

The solution was simple in the end, but required a good deal of research to find and understand. But before we get to that, let’s talk a bit more about the setup. The actual production setup is more complicated than this, but the simplified model will suffice for the example. Because the client is in fact a second WCF service, both the client and server are on Windows Server 2008 R2 boxes, both in secure but distinct subnets. As they are both custom .Net applications, we were able to utilize netTcpBinding for increased performance and simpler security, in comparison to httpBinding and wsHttpBinding. But as we shall see, that decision had an unforeseen consequence.

TCP binding with either Message or Transport is secured by Kerberos tokens issued by Active Directory in a Windows network, whereas wsHttpBinding uses a certificate/SSL to encrypt the communication. Thus the TCP route has lower setup overhead, in that you do not need to purchase a certificate or alternately manage a certificate server in-house. As a business-oriented programmer, I’ve never needed to understand Kerberos. But from my Unix sysadmin days, I knew that Kerberos was developed at MIT and provided a means for authenticating a client and server, for instance when connecting to a network file share over the SMB protocol. Thus in hindsight the problem is not at all surprising, but admittedly I did not know enough about WCF to recognize the implications at the time.

In the test environment, both servers were in the same network segment and the WCF services ran under the same service account. I was mildly concerned that I had not tested across a subnet boundary, but it turned out this was not even the problem: as I researched further, I found that (a) the two services were running under different service accounts in production, and (b) one of the service accounts was not in the same Active Directory domain as the servers (both domains being in the same Tree, however). 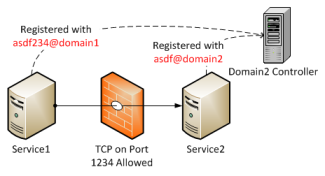 To prevent getting too long winded, I won’t repeat most of what I found in three particularly helpful Microsoft resources — well, helpful once I was able to put the pieces together. Alone, none of them simply stated the required practice.

Between these resources, I came to realize that:

The solution? Simply specify the UPN identity in the config file (if using the auto-generated client proxy) or in code, using the fully qualified domain name (FQDN):

(In a simpler situation, the FQDN would probably be domain1.local.) In C#, this can be done when creating the EndpointAddress:

When running under the Network Service account — that is, using an SPN instead of UPN —:

By the way, after finding the answer, I learned that the System log on Service2 actually had a very helpful error message in it; it tells us about using the FQDN and that the wrong account was being used:

The Kerberos client received a KRB_AP_ERR_MODIFIED error from the server

Actually, I spelled it correctly but the JS/CSS for code formatting converted it to lower case. I’ll add a note in the text.