Continuing from Upgrading safnet-directory, part 1, it is time to improve the solution’s unit testing. At the outset, the controllers cannot be unit tested effectively due to their direct dependence on Entity Framework and ASP.NET Identity Framework classes. With application of an in-memory database, they could be integration tested, but not unit tested as I understand and apply the term.

The data access needs to be pulled from the controllers, and the classes need to be refactored for inversion of control / dependency injection. In a larger application I would create three layers with distinct responsibilities:

Given that there is no significant business logic in this application, new code in the middle layer is not worth the effort. But I will extract a simple data layer. It will not be as comprehensive an interface as I would make in a larger app, but it will be effective in isolating the Controllers from Entity Framework. ASP.NET Identity classes are already encapsulating logic around authentication, and they can remain - so long as they have proper interfaces and can be injected into controllers.

For dependency injection, I know that ASP.NET Core (coming in a future article) has its own good system. I have heard kind words spoken about Simple Injector but never tried it out before.

I’ll configure registrations with Scoped lifestyle so that objects are tracked and disposed of properly. In anticipation of future async work, I’ll setup async scoped as a default. Along with Simple Injector, I will create an interface for the existing ApplicationDbContext class, and call it IDbContext. Adding this method to my Startup class:

On the MVC-side of the house, I was using Owin as a cheap dependency manager for authentication with ASP.NET Identity framework. I will leave this alone for the moment, since that will likely require more radical change in the .NET Core future anyway.

The members of the IDbContext were easy to identify, based on how the Controllers were using ApplicationDbContext. One of those members returns an IQueryable. For unit testing, I need to be able to mock it. MockQueryable will do nicely. It seems that it is also time to Install my preferred unit testing tools, NUnit 3 and FluentAssertions.

From Visual Studio Testing to NUnit

First, manually remove the reference to Microsoft.VisualStudio.QualityTools.UnitTestFramework. Next, find-and-replace VSTest attributes with NUnit. The most common changes:

Here is a PowerShell script to fix these up:

There is another hard-coded dependency that needs to be lifted in order to fully unit test the API EmployeeController: it uses the Thread.CurrentPrincipal to interrogate the user’s Claims. If the user is not in the “HR” role then it strips off the identifier values from the records before responding to the HTTP client. This can then signal that the client should not try to edit these records (note that the Post method is already authorized only for HR users, thus giving defense in depth). For a moment I thought about extracting an interface for accessing this information, but then I remembered that ApiController.User property and confirmed that it has a setter. Thus it is trivial to inject a fake user with fake claims:

At last it is possible to fully unit test this class: the database connection has been mocked and the tests can control the user’s claimset. What about the other classes? There are some that will never be tested - e.g. the database migration classes and the data context class; these should be decorated with [ExcludeFromCodeCoverage]. It would be nice to find out what my code coverage is. Without Visual Studio Enterprise or DotCover we need to turn to OpenCover. Let’s try AxoCover for integrating OpenCover into Visual Studio.

Not bad. The display that is. Coverage isn’t very good; 35.8% of lines. However note that it did not ignore the Migrations. I forgot that OpenCover does not automatically ignore classes / methods decorated with either [GeneratedCode] or [ExcludeFromCodeCoverage]. Is there a setting in Axo? Yes. And in fact it did ignore ExcludeFromCodeCoverage. I just need to add GeneratedCode to the list: ;*GeneratedCodeAttribute 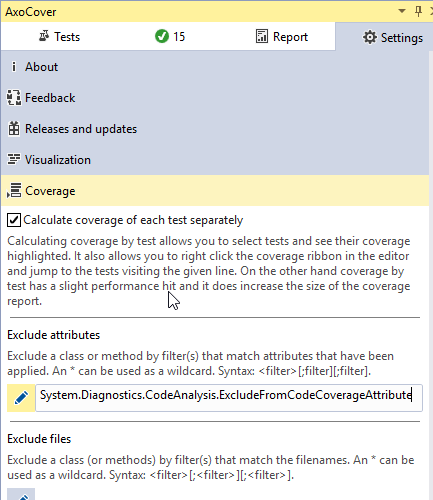 Now we have a full 36.7% of lines! Before trying to fill in the missing unit tests, perhaps there is some more cleanup in order:

Eliminating unneeded code brought me up to 52.6% code coverage. Much of the uncovered code is related to ASP.NET Identity, and I suspect that code will change significantly in the upgrade to ASP.NET Core. Perhaps it is not worth taking the time to fill in missing unit tests for those methods and classes right now. Sole remaining focus for unit testing will be the EmployeeController - bringing it, at least, to 100% coverage.